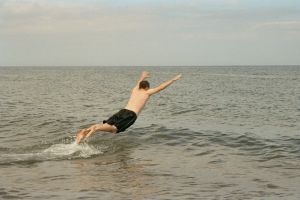 Recently a client asked me to describe my biggest professional failure. (Glad he didn’t ask about my biggest personal failure, as it would have taken me a while to sort through that list.)

I was tempted to borrow Hank Dye’s response when he was asked the same question in a new business presentation. At the time Hank was president of Dye, Van Mol & Lawrence, a leading PR firm in the Southeast and the agency that brought me to Nashville.

Without missing a beat he said, “There weren’t any that the clients knew about.”

Hank understood the importance of serving clients with excellence, and when mistakes happened – as they inevitably do – he was quick to get them corrected.

One of the things that impressed me when I interviewed at DV&L was the agency’s written commitment: “We will do what is right, even if it hurts us.”

Those weren’t just words, we lived by them. (Hank, but the way, was a great mentor to me in many ways, and I will be forever grateful for all that I leaned from him and the other partners.)

Unfortunately, some failures do get noticed by clients. At the top of my list is an event I was responsible for managing that involved the launch of a client’s new product.

At the time I headed up the public relations department for an advertising agency. Everything for the event was planned in great detail. We had several well-known national speakers lined up, along with the company’s CEO and other top executives. I had hired a videographer through a national paid news service to do a video news release (VNR) to help us extend our broadcast coverage, and my team and I had done a full-court press to turn out the news media. We had an excellent press kit and media advisory, and we felt very good about the launch.

In the early morning hours the day of the event, several tornadoes ripped through Middle Tennessee, including downtown Nashville where our event was being held. Guess where all the news media were the morning of our launch? Out covering the damage. We had one TV crew show up briefly for our event, but for the most part it was a publicity flop.

The client understood that there’s nothing much we could do under the circumstances, but it still was very disappointing. We put together a post-event news release with photos, and distributed them through a paid release distribution service as well as through our media list, along with the VNR. We picked up some good national coverage that way, but not as much as we could have gotten under normal conditions.

If we are wise, we learn more from our PR failures than from our successes. One of the lessons I learned from this failure was to always be prepared for the unexpected. Rather than assuming that everything is going to go as scheduled, I now assume something outside of my control will go wrong. I ask more “what if” questions and have a carefully thought through contingency plan.

Of course this event is not the only PR venture that didn’t go as well as I planned, but it’s the one that stands out most in mind my – and the event for which I’d most like to have a redo.

2 thoughts on “What I Learned from My Biggest PR Flop”