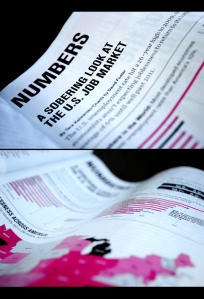 On any given day I usually get a number of emails from various PR/communications news and information sources. And truthfully, more times than not, I glance at the subject lines and usually don’t take the time to read them unless something really stands out.

But yesterday, when I ran across this subject line, I had to stop and take a look for myself: “Brutal emails to employment seekers.”

What sort of person would write a brutal email to someone looking for a job, I wondered? Then I was introduced to Kelly Blazek, manager of a Cleveland-area job bank and principle of Gemba Communications, LLC. Oh, and she also was Cleveland’s “2013 IABC Communicator of the Year.”

So now I was even more intrigued – a person who is expected to have good people skills and manners, and a certain level of social media savvy, was replying to some job seekers in what can only be described as rude, demeaning, “How-dare-someone-like-you-contact-someone-like-me” language.

She actually seemed to enjoy belittling people who were seeking help, which is why I think this story resonated so strongly with people when they heard the details.

You can read some of what this little sweetheart from northeast Ohio had to say to folks seeking to network with her or be part of her job bank in this PR Daily article and in Cleveland.com, which as of a few minutes ago had 431 comments, most of which were not very favorable toward her. This afternoon, CNN picked up the story with the headline “Nasty LinkedIn rejection goes viral.” Uh oh.

Apparently Ms. Blazek hadn’t considered the possibility of some on the receiving end of her vitriolic responses taking to social media to expose her nastiness, which is pretty stunning when you think about it.

What communications professional in this day and age isn’t aware that anything one puts in writing to an individual – particularly through a platform like LinkedIn – can be made public via the Internet for the world to see?

Not surprisingly, Ms. Blazek is getting raked over the coals in Cleveland and throughout the PR community.

She apologized for her rudeness – which is all well and good – but really, what else could she do when this blew up in her face? Is she truly sorry for her behavior or just sorry that she got caught? Only she knows, but I found this comment on the Cleveland.com site revealing, if true:

“I know Kelly quite well, and she’s only kind and gracious when it benefits her. To those she deems beneath her, well, she can be quite sadistic. This is Long Time Coming and Just Desserts in my opinion.”

So what lessons can be learned from all this?

For one thing, character really does count and how we relate to others really does matter, regardless of their “level” or what they can “do” for us.  The Gold Rule – treating others as you would like to be treated – is the best policy for personal and professional success.

A second lesson is that apologizing isn’t always some magic bullet to make things better. For sure, this whole sorry matter would have been worse had she not apologized, but the fact that Ms. Blazek went to some lengths to write these demeaning replies to multiple people tells me she enjoyed all this, which really says something about this lady’s psyche. I can’t imagine anyone wanting to do business with her.

But even giving Ms. Blazek the benefit of the doubt that her apology was sincere, what’s most troubling to me is the glee she seemed to take in kicking people who may already be down emotionally.

At one time or another most people have had to look for a job, and it can tough – especially in today’s market. They face a lot rejection. So the last thing someone needs when trying to network with someone running a job bank is to get a demeaning “you’re a worm” response from a person who should be supportive and encouraging of others.

To this day I remember very clearly people who, early in my career, took time to speak with me and helped me network when I was job hunting. And I remember some who wouldn’t give me the time of day, but thankfully I never got the sort of awful treatment this lady dished out.

If people are such a pain to her, she really ought to get out of the communications business.

Third, even if someone you don’t know requests help or an endorsement, be polite in declining the request. Sure there are job hunters who are presumptuous, annoying or clueless, but you never know what a person has been through on a particular day. Some of them might be desperate, and the way you respond to them might make or break them. I’ve been fortunate to have some good mentors, and one thing they taught me was to show dignity and respect to all people.

Fourth, this incident clearly demonstrates how quickly a crisis can develop and then spiral out of control. Once one of her responses went public and was discussed on a local radio show, others who had received similar correspondence began to surface. And I wouldn’t be surprised if more followed.

Will Ms. Blazek be able to recover and resume her communications and job-bank businesses? Time will tell but if I were her, I’d hang on to those job-bank contacts because she may be needing them soon.