Chick-fil-A has long been one of my favorite restaurant chains. It’s a cheerful, wholesome and clean environment, where the employees seem happy to be there and eager to serve customers. The food is pretty good, too. Chick-fil-A also has been a terrific corporate citizen and good neighbor, helping local charities and giving out free food when natural disasters strike.

There is much to admire about the company, which has risen to become one of the top fast-food chains in America despite being closed on Sundays. It has been a model of how a corporation that adheres to Christian values—and that creates a family environment while being inclusive and welcoming of everyone—can garner incredible loyalty that translates into financial success.

A couple weeks ago I stopped by one of our local Chick-fil-A restaurants, and the place was packed with people who were greeting each other and happily sharing experiences. A portion of that evening’s proceeds was going to help a person in need. It was an uplifting experience just being there, which is part of the reason for company’s strong attraction to so many of us who share founder Truett Cathy’s faith and values. 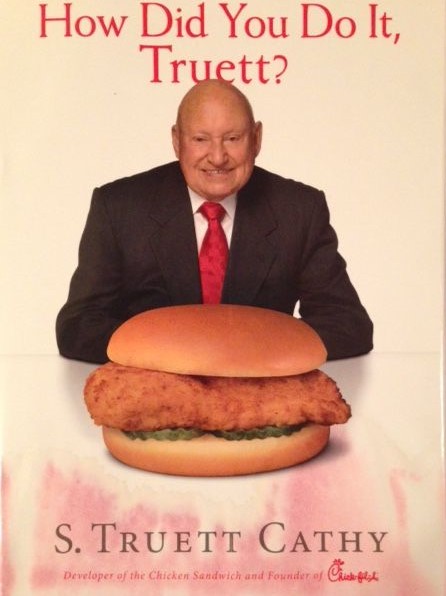 Truett Cathy, who passed away several years ago, was the real deal. After reading an article about how his Christian values guided him through life, I wrote a brief letter expressing my appreciation for his testimony and faithfulness. A short time later I received a copy of his book, How Did You Do It, Truett?, with a personal inscription thanking me for my note and listing Proverbs 22:1: “A good name is more desirable than great riches; to be esteemed is better than silver or gold.”

In 2012, a boycott of Chick-fil-A bombed badly. As I noted in a blog post, which was subsequently picked up by Baptist Press, the boycott was a classic PR backfire that scorched the boycotters when Gov. Mike Huckabee launched a special Chick-fil-A Appreciation Day. Millions responded to show their support of the company, resulting in a huge day of sales for Chick-fil-A.

Billy Graham and Rick Warren were among scores of leaders who joined Gov. Huckabee in defending the embattled chain. Ted Cruz, who had just won the Republican nomination in the Texas Senate run-off race, served Chick-fil-A at his victory party. A major Wendy’s franchise owner put, “We stand with Chick-fil-A” on his restaurants’ signs.

Chick-fil-A didn’t have to lift a finger to defend itself; instead, a panoply of supporters did that for the chain.

Seven years later, it’s a much different story. Chick-fil-A is once again in the midst of a firestorm of controversy, but this time it’s from some of its most loyal customers—the ones who have consistently supported Chick-fil-A and made the fast-food chain the success it is today.

Many feel betrayed by the company’s recent announcement that it will discontinue corporate donations to faith-based organizations like the Salvation Army, apparently because they believe in the biblical definition of marriage between one biological man and one biological woman. This, of course, is offensive to the LGBTQ community, which portrays such beliefs as bigoted and discriminatory, even though the Salvation Army serves all people in need.

Chick-fil-A’s announcement has been met with widespread disappointment and anger.

In a statement the Salvation Army said it is saddened by Chick-fil-A’s decision, noting, “When misinformation is perpetuated without fact, our ability to serve those in need, regardless of sexual orientation, gender identity, religion or any other factor, is at risk. We urge the public to seek the truth before rushing to ill-informed judgment.”

Gov. Huckabee called the decision “such a disappointment,” saying that after being so successful it was bewildering that the company would “surrender to the bullies.” He warned that the implications are “far broader” than Chick-fil-A. Similar sentiments were expressed throughout the Christian community.

Christian Post contributor Mat Staver, an attorney and chairman of Liberty Counsel Action, reported that one of the places Chick-fil-A is now funding is Covenant House, which he alleges is an LGBTQ activist and “takes girls to abortion clinics.”

[Update: Townhall.com reports that as far back as 2017, the Chick-fil-A Foundation donated to the Southern Poverty Law Center, which designates conservative organizations like the Family Research Council as “hate groups.”

As noted in a Washington Times article, the gunman who attacked FRC in 2012 told the FBI that he found the organization on SPLC’s list of “anti-gay groups.” FRC President Tony Perkins said in a statement, “Not only has Chick-fil-A abandoned donations to Christians groups including the Salvation Army, it has donated to one of the most extreme anti-Christian in America.”]

While CEO Dan Cathy insists that the company was not giving into the demands of LGBTQ activists, the perception of Chick-fil-A’s actions certainly seem to be a step in that direction.

The loss of confidence in Chick-fil-A was further eroded by Tim Tassopoulos, president and COO, who was quoted as saying, “as we go into new markets, we need to be clear about who we are.”

So who, exactly, is Chick-fil-A these days? A whole lot of people would like clarity.

As has been demonstrated time and time again, appeasing anti-Christian groups leads to nothing but further demands. Just ask the Boy Scouts, who are now reportedly considering bankruptcy.

Or, try making friends with ADWEEK’s Rigel Cable, who writes, “Dear Chick-fil-A: The LGBTQ+ Community Is Not Behind Your Latest Publicity Stunt.” It turns out that stopping corporate donations to what Mr. Cable terms as “anti-LGBTQ+ organizations” and instead giving funds to an alleged LGBTQ activist organization just isn’t enough to make him a customer.

There may be exceptions, but for the most part people like Mr. Cable are as likely to eat at a Chick-fil-A restaurant as the people who buy Nike’s new Colin Kaepernick shoes are to purchase patriotic American apparel.

Chick-fil-A could never do enough to placate the LGBTQ community at large because they will not accept anything less than total capitulation of its values and full embrace of the LGBTQ agenda. Tolerance of other views is a foreign concept to them, and it’s hard to imagine them being a significant part of the company’s customer base.

In going down the path of being all things to all people, Chick-fil-A’s leadership has made the mistake that has caused so many brands to stumble, and in the process lose their identity and distinctiveness. The result: Sarcastic skepticism from the LGBTQ community at large, and a sense of acute disappointment and betrayal by scores of its traditional-values customers.

Forbes contributor Dawn Ennis, who reports on the fight for transgender equality and other LGBTQ issues, writes that the company is now getting “grilled by both sides.”

It appears Chick-fil-A took this action to make it easier to expand into new markets, but the opposite is likely to happen. Now that LGBTQ activists, abortion-rights advocates, far-left college professors and liberal news media outlets have seen a crack in the company’s values’ foundation, new demands will surface, which Chick-fil-A will have to meet—or else.

It’s a slippery slope. Detractors will demand more and more, until the company’s culture is no longer recognizable. If Chick-fil-A resists any of these demands, the backlash and outcry will be enormous. They know that if they can get the company to blink once, they can get it to blink again.

At the same time, it will be far more difficult to rally support from people who feel they’ve been burned. Chick-fil-A still has a significant amount of brand equity and goodwill, but the reality is that a lot of us just don’t feel the way we used to about the brand.

How did Truett do it? It wasn’t by caving to political correctness and taking for granted the patronage of people who have made Chick-fil-A such a great American success story.

Don Beehler is a public relations consultant in Franklin, Tennessee.