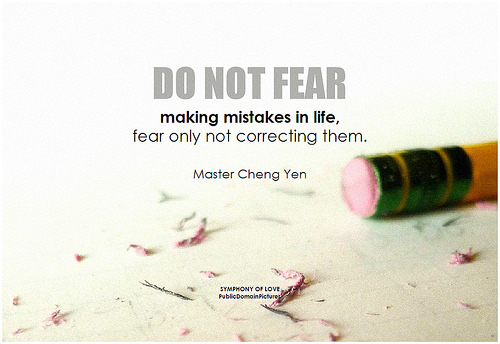 A common complaint among journalists is the lack of relevance of the materials they receive from corporate communications and PR professionals.

Much of this information, they lament, is written like advertising, not journalism.

As a former reporter and editor, I can attest that is a sure-fired way to have your news release discarded.

Here are 6 key mistakes to avoid when writing a news release:

photo credit: symphony of love Master Cheng Yen Do not fear making mistakes in life, fear only not correcting them via photopin (license)

No where is that more true than in the world of journalism, which has its own particular style of language usage.

Recently I came across an article titled “20 words and phrases that will doom your pitch.” I sure didn’t want that to happen, so I read through the list to identify these “cursed words,” as the article described them.

You can read the list of words the article warns will sabotage your pitches and news release here. If you get as far as the comments section at the end, you’ll see additional words submitted by readers as candidates to add to the banned list.

“The reporters not only ignore these, they hold them up as points of mockery,” said.
Michael Smart, principal for MichaelSMARTPR. He and New York Times technology columnist David Pogue drew up the list of words and phrases that they say undermine a writer’s creditability.

The real problem with these 20 words is that they are more suitable for advertising copy than a news release or pitch letter.

Why is this a big deal?

Because there’s a big difference between the words and phrases used in advertising and journalism. Ad agencies that don’t understand this difference will have a hard time being successful with their publicity efforts or even being taken seriously.

Reporters are very sensitive to attempts to disguise advertising as news or use promotional language to hype a product, service, cause or company. They can sniff these out from a considerable distance, and it’s the quickly way to have your content tossed in the trash or deleted.

To be considered credible by the news media, you have to write your pitch as objectively as possible, emphasizing its news, trend or human interest aspect. Or, if you want to be considered as a source, focus on your expertise to comment on a particular topic and provide insights.

Being familiar with The Associated Press Stylebook will help you use appropriate journalism language and avoid faux pas. Think of it as a pocket language guide you’d want to take with when traveling to another country so that you can converse with locals.

The best way to maximize your chance of landing news media coverage is to write and think like a reporter – and, of course, have a good story to tell.