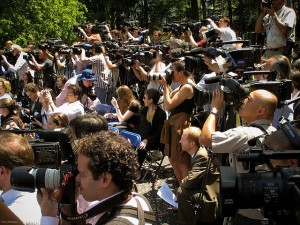 While attending the 2012 Digital Summit in Atlanta a couple months ago, I heard one of the speakers make the point that the future of journalism is participatory.

With the rise of technology, such as cell phones that are able to record events, everyday citizens can capture news as it happens and distribute it instantly via the Internet. Think about how many times you’ve seen images on the news recently—from uprisings in the Middle East to tornadoes tearing through the heartland—that are attributed to a non-journalist who was at the right place at the right time.

So, why would having all those extra eyes, ears and equipment to capture events be bad news for some media outlets?

How about when a national reporter sets out to intentionally distort what someone says through deceptive editing, only to have the entire context made available by John Q. Citizen with a recording device.

Now, there are ways to hold dishonest reporters accountable, which no doubt is very disturbing to people like Andrea Mitchell of NBC.

After selectively editing a speech by Mitt Romney in an attempt to portray him as out of touch, a smirking Ms. Mitchell mockingly said, “It’s amazing.” But her smirk quickly disappeared when a blog site noted that NBC had doctored the video.

After exposing what she and her editing crew tried to pull off, the post quickly went viral, putting the network’s spin doctors in high gear. It turns out the joke was on Ms. Mitchell because she’d been caught in a blatant deception.

It’s amazing, all right, that a once-respected news outlet like NBC would stoop to something like this. However, it’s hardly an isolated case.

In March, NBC was caught editing the audio of George Zimmerman’s 911 call in a way that falsely portrayed him as racially profiling Trayvon Martin. Last August MSNBC’s Ed Schultz played an edited clip of then-presidential candidate Rick Perry making it sound like he was taking a racial shot at President Obama.

And these people expect us to trust them?

While this sort of behavior has been going on for a long time among some segments of the news media, the culture of “anything goes” seems to be getting worse.

In its heyday “60 Minutes” was notorious for the footage it left “on the floor” to shape a story in the way its producer wanted. Some of the savvier companies that were subject to a “60 Minutes” investigation would hire their own videographers to tape every interview of executives as a way of trying to keep Mike Wallace and Co. honest, but before the Internet was around it was a tough slug to get the word out if you were the victim of a “60 Minutes” hit piece.

Now, reporters are being held accountable by everyday citizens who can expose their shenanigans to the world with the touch of a button.

That may be bad news for unethical reporters, but it sure is good news for the rest of us.